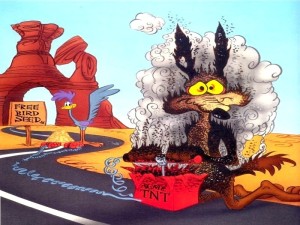 Magnitude of 9.5 = around 60 million tonnes of TNT

1. There are about 500 000 earthquakes a year. Only about 100 000 of these can be felt and about 100 cause significant damage each year, the rest are recorded by sensitive instruments. There might even be one happening right now and you wouldn’t know it!

2. The largest ever earthquake recorded was in Chile, May 22 in 1960. This had a magnitude of 9.5 – which would be about 60 million tonnes of TNT exploding.

4. Earthquakes that occur on one side of the Earth can shake the other side, sometimes for days in something called ‘oscillation’‘. The massive earthquake which caused the 2004 tsunamis around the Indian Ocean, is believed to have caused a weakening of the San Andreas fault in California.

5. The Pacific ‘Ring of Fire’ (shark bait ooh ha ha) which is actually more a horseshoe shape than a ring…but ‘horse shoe of fire’ just sounds wrong. It’s the most geologically active region of the Earth as there’s a whole lot of tectonic plates bumping and grinding against each other here.  In fact, around 80% of major earthquakes occur here. The -cough- ‘ring’ circles the Pacific Ocean and passes through North and South America, China and Russia. It contains 452 volcanoes which is over 75% of the Earth’s active and dormant volcanoes.

6. The fastest seismic wave has been recorded at 360km/hour

8. The city, Concepción, in Chile moved three meters when a huge 8.8 magnitude earthquake struck in February 2010. This caused a rift in the Earth’s crust that shifted the city towards the west. This earthquake is thought to have had bigger implications – by changing the planet’s rotation slightly and shortening the Earth’s day!

9. Earthquakes have been a big part of mythology in civilisations through time. In Japanese mythology, a giant catfish called Namazu is responsible. In Hindu mythology, the Earth is balanced on the backs of eight elephants which rest on the back of a turtle which lies on a snake – if any of those animals move then an earthquake occurs. In ancient Greece, it was believed that earthquakes were the wrath of sea-god Poseidon, who would angrily strike his trident on the ground and cause an earthquake…which seems fitting as many earthquakes are also associated with tsunamis!

10. The largest tsunami caused by an earthquake was over 85 meters high, which occurred in 1771 on the coast of Ishigaki Island, Japan.