Hot spots are places within the mantle where rocks melt to generate magma. We know where the hot spots are by the amount of volcanic activity that happens there. We may see volcanoes form. Red-hot magma from the Earths thickest layer, the mantle, rises up  through to the Earths surface. When the magma reaches the surface, it’s called lava and is the red-orange substance that spills out of a volcano. 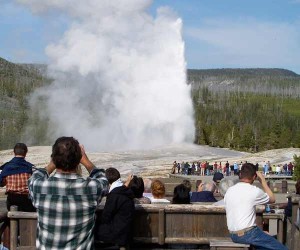 Some hot spots heat up the groundwater that lies beneath the Earth’s surface. This causes water and steam to erupt from the ground with great force. These eruptions are called geysers. One of the biggest geyser’s is Old Faithful in Yellowstone National Park in the U.S. At the point of eruption, the water is 95.6 C (204 degrees F) and reaches 55 meters (180 feet) high. Impressive!

In other areas such as New Zealand, not only are there volcanoes, but thermal areas of heated pools of water or boiling mud…like at Rotarua, which stinks like crazy with the smell of sulphur.

There are around 50 hot spots across the globe. Hot spots generally are gathered in regions like Iceland, Indonesia or Hawaii.

Nobody quite knows for sure how they came about, but there’s a couple of theories.

Theory 1. A mantle plume – which is where a thermal abnormality causes an upwelling of magma (basically, for some reason, an area of magma gets VERY hot). This super-heated magma then wells upwards, melting rock as it rises through the lithosphere (upper, rocky layer of the earth). This produces volcanoes at the surface, and can be formed in either oceanic or continental conditions.

Theory 2. Movement in the lithosphere causes a weak point or crack which allows the magma to leak to the surface. Like the first theory, the magma then rises to the surface forming volcanoes. 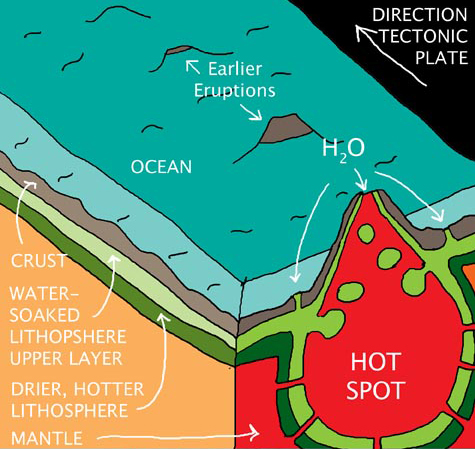 Volcanoes are initially formed over hot spots, but because tectonic plates are moving, the volcano slowly drifts away from the hot spot and will eventually become extinct (not capable of errupting). A new volcano will then be formed above the hot spot, and so on. If the volcanoes are formed in the oceans, as they cool they produce islands, or atolls (ring shaped reefs) and seamounts (mountains rising from the seafloor).

The volcanic islands of Hawaii are an example of these oceanic volcanic masses which have moved away from the hot spot. These are within the Pacific Plate, meaning they have anomalous volcanism (not at a plate boundary) and originate from the Hawaiian hot spot, which has been active for at least 70 million years. They have moved 6000km away from the hot spot and have produced a volcanic chain.

Volcanoes originating from continental hot spots move away from the hot spots where they cool and sometimes become extinct, such as the Yellowstone hot spot which has been active for about 15 million years.