This pause in global warming is called the Climate Hiatus. The climate hiatus is thought to be entering its 16th year; temperatures haven’t risen significantly since 1998 despite heavily increasing amounts of greenhouse gases. Because of this, climate models have been difficult to adjust and currently don’t match previous data and temperature predictions. Climate models anticipated that the Earth would warm at 0.21°C per decade from 1998-2012, but instead it’s been warming at 0.04°C per decade.

When the climate just doesn’t match the model…

Some scientists believed the hiatus was due to volcanoes, pollution from China, atmospheric aerosols and even the Sun as potential culprits. But climate scientists were worried as they knew that the effects of greenhouse gas emissions had to be building up somewhere.

During 1998, the year that broke temperature records, the Earth was undergoing an El Nino period, which then switched to a La Nina period. During La Nina, sea surface temperatures drop releasing heat into the atmosphere. This cooling of the oceans may have changed the normally warm Pacific region into a cooler state,  which then balanced out the warming caused by greenhouse gases. This climate system is called the Pacific Decadal Oscillation. Climate scientists predict that in the coming years, this will switch back and the Earth will experience very rapid warming. 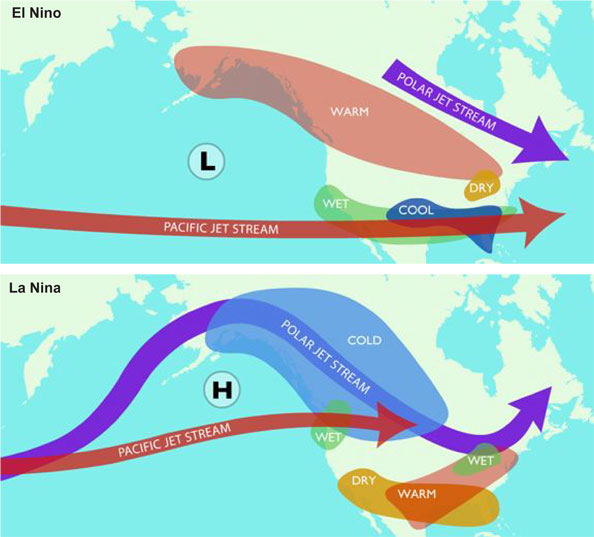 There’s more; the Sun waxes and wanes on an 11 year cycle, and around the climate hiatus period the sun entered a prolonged lull in the weakest solar maximum in a century. This not only helps explain the climate hiatus, but also why some climate models have over-estimated global warming as they factored in a stronger solar output.  Particles released by volcanoes, such as ash, reflect sunlight back into space and an increase in these can result in a mass cooling effect. This was seen after the volcano, Mount Pinatubo erupted in 1991 lowering global temperatures about 0.5°C. An increase in stratospheric aerosol particles are another factor in keeping the Earth cool.

An important part of understanding the climate hiatus is the Pacific Decadal Oscillation (PDO). Different phases of its cycle either favours the atmosphere-warming El Nino (positive phase), or the cooling La Nina (negative phase). These phases switch around every 15-30 years. In 2011, researches at the National Centre for Atmospheric Research (NCAR) led by Gerald Meehl showed that when they took into consideration the PDO when constructing climate models, it showed decadal breaks in global warming…which sounds an awful lot like the climate hiatus we’re experiencing!

The research team flipped the PDO to positive, which showed decades of rapid warming. We’re currently in the negative phase, so this gives an idea that when the PDO flips back to negative, we’re headed for rapid warming.

Another team showed similar results by incorporating tropical trade winds into models, which help promote cool water to upwell in the eastern Pacific equatorial region in the La Nina period. In the extreme La Nina of 1998, these winds helped push the ocean into the cold phase of the PDO, which counteracted global warming caused by our increasing greenhouse gas emissions.

However, here’s the twist; a study recently published in the Royal Meteorological Society suggests that the climate hiatus might be more due to incomplete data than aerosols, solar flares or polar jet streams. Oops! Apparently the HadCRUT4 model only considers data from 84% of the globe. The remaining 16% are basically tricky to get to places. Unfortunately, this includes the poles and Africa. Kind of important places when it comes to climate change. Which is why the authors, Kevin Cowtan and Robert Way, used data from satellites to ‘fill-in the gaps’.

What they found is, to cut a long story short, that there hasn’t been a climate hiatus at all. In fact the actual rate of global warming, 0.12 °C per decade, nicely ties in with the UN’s Intergovernmental Panel on Climate Change predictions.