Name: Cannabis (a plant genus). Also known as 'marijuana' which means 'prisoner' in Nahuatl, an old language of Mexico. Hash is the resin from the plant. 'Skunk' has x 3 amount of THC.

Derived from: Cannabis sativa or Cannabis indica plant, which is related to hops and nettles. Originally from South and Central Asia.

Chemistry: The plant contains 400 chemicals, including an antibiotic-like chemical, cannabidiolic acid. There are 60 'cannabinoids' including THC and CBD.

How does it work?
There are naturally occuring cannabinoids in our bodies called endocannabinoids such as anandamide (AEA) and 2-arachidonoylgycerol (2-AG). These are ligands; molecules that bind to proteins in order to generate a signal response. The ligands are released into the synapse (the space between nerve cells) and carried to the next cell where they bind to two cannabinoid receptors, CB1 - in the central nervous system and CB2 - in the peripheral nervous system, to produce the response required to regulate pain, appetite, mood, memory, learning movement skills, and the regulation of the nervous system.

This process is called the endocannabinoid system. When cannabis is smoked it quickly passes from the lungs, into the bloodstream, where it is carried to the brain where it attaches to the receptors. This also triggers an increase in dopamine, which produces a 'feel good' sensation for between 1 -3 hours, but reduced concentration, memory and poor concentration can last for days. 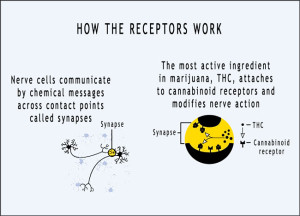 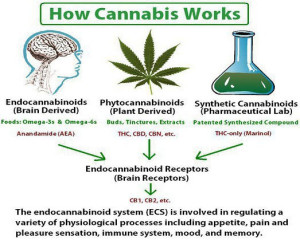 Effects:
This short-lived sensation of euphoria comes at a very high price. Research has proven the following facts for those using cannabis:

-You are twice as likely to crash your car if you drive within three hours of smoking marijuana.
-Cannabis leads to male sexual dysfunction
-It suppresses the body's immune system, increasing risk of cancer and infections.
-Can lead to ongoing anxiety, mild paranoia and other personality changes.
-Regular cannabis users develop dependence: 1 in 10 of all cannabis users and 1 in 6 among those who start in adolescence
-Produces short and long-term psychoses. A Welsh study found that -Cannabis use can raise the risk of psychosis by 40%.
-Even light use of cannabis causes a change in brain anatomy, particularly in the nucleus accumbens and the amygdala, areas both useful in emotions.
-Gum disease risk - makes your breath stink and your teeth fall out.
-Depression - those genetically predisposed are at high risk of becoming depressed.
-Reduced brain function; cannabis users who started before they were 15 years old scored worse on brain tests than their counterparts who started later in life.
-Memory loss - especially using cannabis with low levels of cannabidiol, such as skunk..
-DNA altered - cannabis damages human DNA, higher risk of developing cancer.
-Severe vomiting - chronic abusers of cannabis have a high risk of developing a vomiting illness.
-Testicular cancer - considerably higher risk of developing testicular cancer.