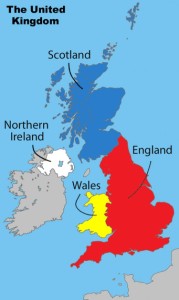 Firstly, let's clear up a great confusion. The United Kingdom, or 'UK' consists of England, Wales, Scotland and Northern Ireland. Great Britain, or 'GB' doesn't include Northern Ireland. Each is individually a country, as is the Republic of Ireland or 'Eire'.

Now then, what's attracting you to studying in the UK? Perhaps the history; who wouldn't want to study in the land of Shakespeare, Boudicca or Churchill. It was the heart of the Industrial revolution and at the height of the British Empire, ruled over a fifth of the world's population.  Today it is a thriving multi-cultural nation, with a fondness for eccentricity. Should you decide to spend your time in the UK, here’s what you’ll need to know:

Culture
There are many quirks that characterise British culture - this is the land that produced the humour of Monty Python, the politics of The Monster Raving Loony Party and have made queuing an art-form. You'll find bog-snorkelling, cheese rolling and wife-carrying as a sport. Eccentrics might be avoided in other countries, whereas in Britain they are especially loved. 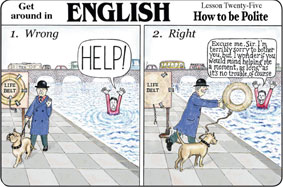 Sorry: British people use the word sorry ALL the time, even when they're not sorry at all. They will apologise if you tread on their foot, whilst pushing through a busy street, when beginning most sentences, or if someone (obviously not British) pushes in front of them in a queue. It's used instead of 'excuse me, pardon, who do you think you are and, sometimes, even as an apology.

British humour: it's very dry and often sarcastic. Be prepared to take some serious ‘mick’ - which is having people make fun of you. It's not meant as an insult (mostly) and showing you're able to laugh at yourself is the quickest way to fit in with the Brits. Don't attempt to reciprocate until you're 100% sure you've got the hang of it though.

Conversation: Most Brits will strike up a conversation with a stranger, however, this is far more likely if you're in the Midlands or North of the country, they're 'generally' a bit more reserved in the South. They may even share details of personal issues with you - like, what their neighbour did to his cat, how a rash just isn't going away, or a rant about how you're mad to want to visit Britain because it's such a rubbish country. Do not be tempted to agree, self-depreciation is a very British trait; it definitely doesn't give anyone else the right to insult the country. A good conversation starter is to complain about the weather - too hot, too cold, too windy, too wet, too dry, too boring - you'll always get a response. Just as there's a way to start conversations, there's a way to end them. Usually this involves one person pretending to look at their watch and saying 'Oooh gosh, is that the time, I must dash, but lovely speaking with you'. You may then stop the conversation abruptly, but don't forget to do a little half run-half walk as you say goodbye like you really are late! 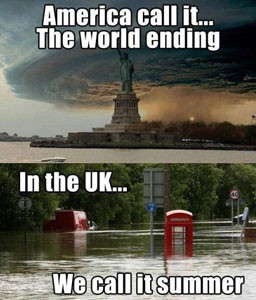 biting winds. Your knees will freeze together and you won't regain feeling in your face again until Spring. Spring is not much different, but with flowers. Summer gets a bit warmer, enough to take your coat off. On exactly three days of Summer, you can actually sunbathe. Autumn is bleak; everything dies and the sun disappears. However, these seasons do have their own beauty. It's the endless grey days that may leave those from sunnier climes feeling low. Many people have lightboxes to prevent this.

Countryside: Britain is just 229,848 km². It's tiny, yet it's incredibly diverse. There's the mountain ranges of Scotland, the Lake District and Snowdonia, to vast stretches of lush green fields and coastal areas of cliffs and beaches. Invest in a pair of good hiking boots and explore the many marked walking trails around the countryside, or join your university’s hiking club. One of the downsides to walking in Britain is the weather, but a benefit is that you're never far from a pub with a roaring fire, refreshing drink and comfy chair.

Food & Drink: They make jokes about how bad British food is. Like everything here, it's regional, except fish and chips which is everywhere. Your bladder's capacity will increase during your stay in the UK, if they're not drinking tea by the pint, it's beer or cider. People bond in friendship over tea, so never refuse a cup.  See our 'UK Food & Drink' article for more details.

Language: Mostly English is spoken. Yes, that's right 'mostly'. Nearly 20% of the population in Wales speak Welsh, a fascinating language which used to be widespread across Britain. In Scotland, 30% speak 'Scots' which will drive you dotty as sometimes you'll understand it, then in the next moment...you've noooo idea. English is spoken everywhere, but not always in a way you'll understand as Britain is full of regional accents. Britain has over 8% of foreign born migrants (36% in London), and many still only speak their native Indian, Polish, Pakistani or Bangladeshi. Check out these accents courtesy of Anglophenia: Hear accents of the UK

Accommodation: Universities are either based in a city or on a campus precinct possibly outside of a town or in the countryside. City campuses generally have teaching facilities focused in a particular area, whilst accommodation is more scattered. There's 'Halls of Residence' (Halls of Res), private house share or room rental available. Make sure you check out transport if some way from the campus, you'll be wanting to make the most of university late night entertainment. Renting a room in a private house is cheap, but you won't have much time to socialise with other students. Halls of Residence aren't cheap, but worth every penny for the experience they provide. Campus style universities generally have on-site Halls of Res located nearby to the teaching facilities. 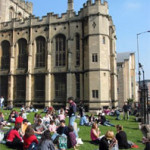 Larger Halls of Res might have a bar, which is great place to socialise with other students, and often host events ranging from political debates to traditional Cèilidh dancing nights. Halls of Res are divided into self-catering, or catered. In self-catering, you buy and cook your own food. You'll probably be expected to buy your own cooking pots, dishes, cutlery, but will be provided a microwave, kettle, toaster, oven and cooker in the communal kitchen. Catered Halls serves you up fabulous food in a communal dining room. Some host formal meals where you get to dress up and pretend you're at Hogwarts. 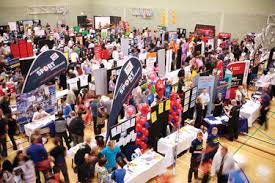 Academic teaching: British academic standards are reasonably high, if you're heading overseas for an equal dose of culture and adventure, this might not be the time to smash that final year Advanced Physics subject.  The degrees can be less flexible than those found in other countries such as the US or Australia and also tend to be more specialised.

Life at university: British universities kick off in September with a raucous ‘freshers week’. Freshers are new first year students. Prepare for lots of events that usually involve embarrassment, fun and getting to know others over seriously late nights. British students take their study and their socialising very seriously. There's a huge array of student groups which organise regular activities on campus, in the community and even overseas trips.

Be prepared for:
Expensive public transport! (Invest in a 16-25 youth railcard).
Dry, sarcastic sense of humour and people insulting you...if they like you!
Unreliable weather & grey skies - always pack an umbrella, and dress in layers.
Drinking culture - much British socialising revolves around pub culture, and clubs for students. University students often socialise fairly separately to locals - different nights, different pubs etc.
Expense - the British pound is currently quite strong, so depending on your home country's exchange rate, this can make your exchange semester quite expensive.