Not this Marianas Trench! 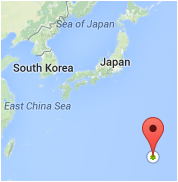 The trench is part of a global network of deep trenches, called troughs, that cut through the ocean floor. They form when two tectonic plates collide and one plate dives beneath the other into the Earth’s mantle, forming an ocean trench.

At the bottom of the trench, the water column above exerts a pressure of 1,086 bars (8 tons per square inch): that’s over 1000 times the stand 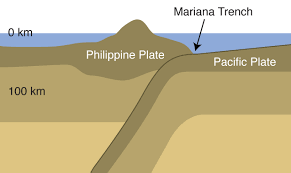 How can anything possibly survive down there? The record for deep sea diving for humans is just over 300 meters. We can survive at much greater heights above sea level (providing a source of oxygen). The difference is due to the air within our lungs! Our lung’s capacity exerts only a certain amount of outward pressure. As the difference between the outward pressure in the lungs and the inward pressure of water increases, there is a greater force pushing into the surface of the body. The sheer weight of the water above you is incredible; one cubic metre of water weighs one tonne, so imagine what it’s like to have 11 kilometres worth of pressure on you. 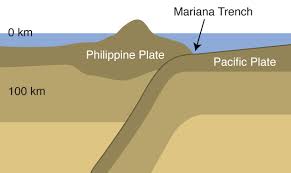 Although the trench is the deepest part of the ocean, it is not the closest to the center of the Earth. This is because the Earth is not a perfect sphere, but rather is slightly squashed with the smallest diameter at the poles. The radius at the poles is 25 kilometers less than at the equator. Due to this, parts of the Arctic seabed are at least 13 kilometers closer to the Earth’s center than the deepest part of the Mariana trench.The area called ‘Challenger Deep’ is the deepest part of the trench. Humans have only entered it twice. First in 1960 in a US Navy bathyscaphe called the Trieste. It took five hours to get down there and then it was too cloudy to see anything other than a flatish looking fish. But this did confirm that life at those crushing pressures was possible. Then in 2012, James Cameron descended in the Deepsea Challenger alone. This time taking just two hours to descend, the craft was able to pick-up samples and film the dark depths.

So what’s down there? Well, there’s amphipoda, which are a bit like shrimp. Then there’s the sea cucumbers which are echinoderms. This type lay on the ocean floor all facing the same direction to catch small meals as they drifted by. There are also Foraminifera which are protists and Xenophyophores which are so delicate it wasn’t possible to collect samples…plus, the odd jellyfish. Therefore we see that biodiversity decreases with depth. So it’s a pretty uninspiring place down there. No colour and little movement; all very different to the ocean surface.