Here it is – every type of life on this planet classified and named. The ‘tree of life’ is made up of Bacteria, Archeaa and Eucaryota. Archaea and Bacteria are similar in that they’re microbial (very small). Bacteria are the largest of these three domains, and yes, that’s right, humans lie within the tiny branch of animals. Feeling insignificant? So let’s look at the left-hand side of the diagram and at Bacteria. 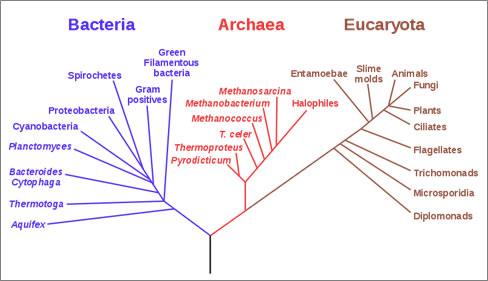 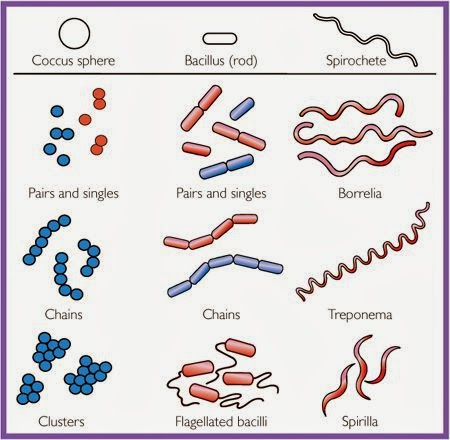 Bacteria are unicellular (made of a single cell) and are typically only a few micrometers in length. On average, they measure a tiny one micrometre, so if you lined-up a million bacteria, they’d measure around a metre. Bacteria can appear in a number of shapes, ranging from rods, spheres and spirals.

Bacteria were amongst the first life forms to appear on Earth, and live pretty much everywhere! They exist deep within the earth, high up on mountains, in deep sea volcanic vents, even flourishing in our manned spacecraft! They grow on and in other bacteria, worms, insects, plants, animals and people and they’re vital to life on Earth. Their functions are many and varied, from breaking down nutrients in our ecosystems so that they may be reused, to maintaining the metabolism and health of larger organisms.

Some bacteria are photosynthetic, and produce food in the same manner that plants do- by transferring the energy from sunlight into sugars and energy and produce oxygen. To understand the biochemical complexity of photosynthesis, you need to learn Krebs Cycle (which is also known as the tricarboxylic acid cycle (TCA cycle) or the citric acid cycle).

Other bacteria absorb food from the material they live in or on, like Saprophytes which release enzymes to help break down organic matter.

Some bacteria live off elements such as iron or sulfur. These are often referred to as ‘extremophiles’. As Mars is a cold planet with high iron content in its soil, it has been thought that if any sort of life would survive there, it’d be this type of bacteria.

Interestingly, it was NASA who discovered probably the world’s most extreme extremophile. Spacecraft that will land on planets are built in ‘clean rooms’. Everyone is suited up in sterile suits, booties and masks, special high pressure air baths and sticky pads guard the doors and the room is kept vigourously cleaned to sterile conditions. But in 2009 as the European Space Agency  (ESA) was preparing to launch the Herschel space telescope during rigorous checks, they found a bacterium. It had only been found once before on Earth, and that was two years earlier at NASA when they were preparing the Mars Lander Phoenix in its clean room. The bacteria was so different to other bacteria that it was a completely new genus. They  called it Tersicoccus phoenicis. Such is its ability to live in almost sterile conditions, that perhaps we have already contaminated space with Tersi. 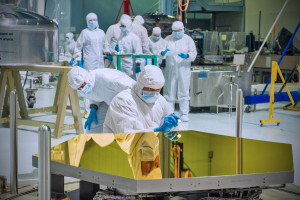 NASA Clean Room. No quite so clean! 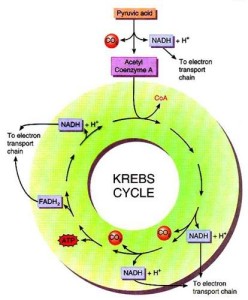 Bacteria reproduce asexually (without a partner) through binary fission (where one cell divides into two). Bacteria will grow till a fixed size and then divide extremely rapidly. In optimal conditions, bacteria can double the size of the population every 9.8 minutes. That’s fast! Just imagine if the Earth’s population suddenly doubled in size every 10 minutes. Within one hour you’d have 127 brothers and sisters.

How do bacteria make us sick?

The bad reputation bacteria have is due to certain species classified as pathogenic (disease-causing). Harmful bacteria can make us sick in a plethora of ways. Some produce toxins (usually as a by-product of cellular metabolism) which can paralyse or destroy the cells’ own metabolic machinery, or multiply so rapidly that they overcrowd the host’s own cells and disrupt function. Some bacterial cells produce substances that triggers a massive immune reaction from the host that the reaction itself becomes toxic.

The most common fatal bacterial diseases are respiratory infections- with tuberculosis TB) alone killing around 2 million people per year (mostly in sub-Saharan Africa). There has been a vaccine available since 1921. You’d think this would be the end of TB, but some bacterial strains have become resistant (no longer work)  to the vaccine (known as the BCG). An increase in HIV have weakened people’s immune system so they catch TB easier, and migrants to westernised countries bring TB with them. There were 9000 new cases of TB in the UK in 2011. Nearly half of these were in London, and over 70% were new migrants to the country. TB is contagious, but not highly, as a result only people who are at risk now receive the vaccine.

Antibiotics are used to treat bacterial infections. However, some strains are developing an antibiotic resistance due to the fast rate of replication and short life spans (lots of generations means a faster rate of natural selection).

However, the majority of bacterial species are harmless and live within the human body. These cells live in a symbiotic relationship: we provide a warm environment for them to live and replicate, whilst they give us a hand in a whole range of functions. For example, bacteria assist in the breakdown of food in the gut, and also help prevent harmful species, including other bacteria, from colonizing. Bacteria also assist in the production of vitamins (mostly B and K) and hormones, and recent studies are now showing the relationship between good bacteria and our immune system’s ability to distinguish threats. They really are pretty handy to have around.

Structure of a Bacterium 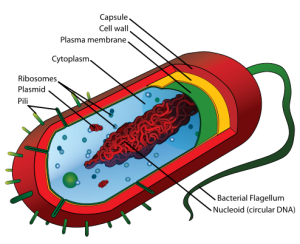 Before the invention of the electron microscope, we thought bacteria were just bags of enzymes wafting about. But actually, they have a very distinct anatomy. They have a flexible cell wall, but do not have a nucleus, so their DNA floats about inside them. Some move about using a flagellus, a whip like tail that it swishes around to propel itself about or multiple shorter tails called flagella.

Bacteria have two types of DNA that are stored differently: (1). chromosome and  (2) plasmid.

Bacterial chromosome DNA is stored within the nucleoid region and contains the genes essential for cellular functions.

Plasmid DNA is stored inside the cytosol of the bacterium cell.  It contains drug and heavy metal resistant genes, and information not essential for growth and metabolism.

This is not the same sort of replication as animals and humans. There, the DNA from two parents are combined. In binary (prokaryotic) fission, just one parent is needed and the DNA is an exact copy of that parent.

1. Replication of the circular DNA molecule inside the cell

2. Replicated DNA move to either poles of the cell

4. The equatorial plate of the cell constricts and separates the plasma membrane so each new cell has exactly the same genetic material.

This process is rapid and typically takes around 20 minutes at room temperature. Meaning a single cell can produce millions of descendants in the space of a few hours.