The Earth is surrounded by a layer called ozone (O3) – this layer is like a blanket which protects the Earth from harmful UV radiation, but also traps enough solar radiation beneath it the planet warm. This is the natural greenhouse effect, which is vital for preserving life on Earth.

The first Irish famine was caused by an intense prolonged frost

Throughout history, the Earth’s climate naturally fluctuates due to Milankovich cycles. The climate switches from cool (glacial) to warm (interglacial) periods which last  between 15 000 to 20 000 years.

The last ice age was the dubbed the ‘Little Ice Age’ of 1400 to 1860. Although temperature only dipped globally about 0.5 C, it caused some serious problems for humans throughout time such as the demise of medieval Viking colonies in Greenland, where the cold weather meant their lifestyle became more Inuit than Viking,  and the Irish Famine of 1740 to 1741 where mild Winters were followed by an intense frost which killed crops, froze lakes solid killing fish and people were forced to burn firewood that only lasted a few weeks leaving them to freeze to death in their beds.

Right now, we’re in an interglacial period about 18 000 years in, heading for another ice age a few thousand years. In fact, there were fears about global cooling as we approach the next ice age, but these fears have rapidly changed to those about the warming of our climate. 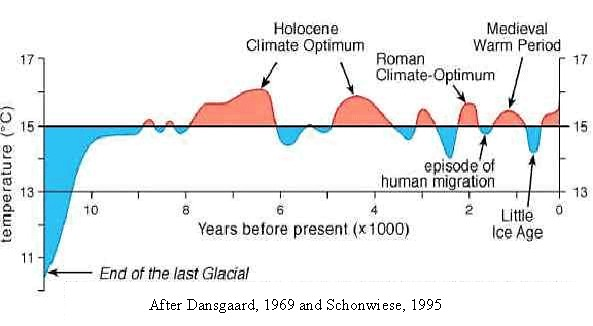 There has been natural fluctuations in temperature – but nothing like what we’re about to experience.

In the last couple of hundred years, temperatures have been rising abnormally, due to the release of large amounts of greenhouse gases which trap more solar radiation within the Earth’s atmosphere and increase temperatures. These gases include carbon dioxide, water vapour, nitrous oxides, methane and ozone. These arise both naturally and from anthropogenic (produced by humans) emissions.

Greenhouse gases are also emitted by humans (anthropogenic emissions). Since the start of the late 18th century when the  Industrial Revolution got underway, humans started burning massive amounts of fossil fuels, such as coal and oil, which emit large quantities of CO2 into the atmosphere.

The effect of this was first noticed in the 1890s by people such as Swedish chemist Svante Arrhenius, who calculated that a doubling of atmospheric CO
2 would cause the climate to warm by 5 to 6 degrees Celsius. (‘proof of climate change’). However, we’ve done little since then to reduce the amount of CO2 we produce, even though the voices of climate scientists is now a deafening roar. They are falling on the deaf ears of our politicians in countries around the world (see, countries embracing alternative energies) 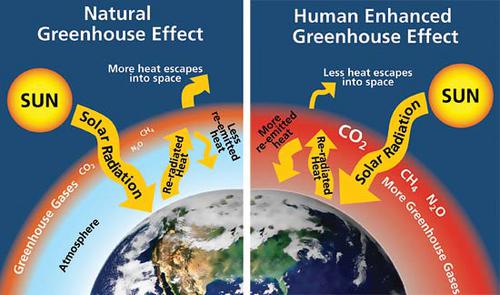 There is a distinct correlation between increases in greenhouse gases and temperature increases due to this relationship. Scientists know that temperatures are rising through looking at ice core records and measure radiative forcing using specific instruments. Click here to learn more about how scientists measure climate change.

Concentrations of CO2 in 2012 – at 392 parts per million from the Mauna Loa Observatory in Hawaii.

The EPA (Environmental Protection Agency) of the USA say that increasing greenhouse gas emissions will produce many changes to our environments and will:

These changes will impact our food supply, water resources, infrastructure, ecosystems, and even our own health.